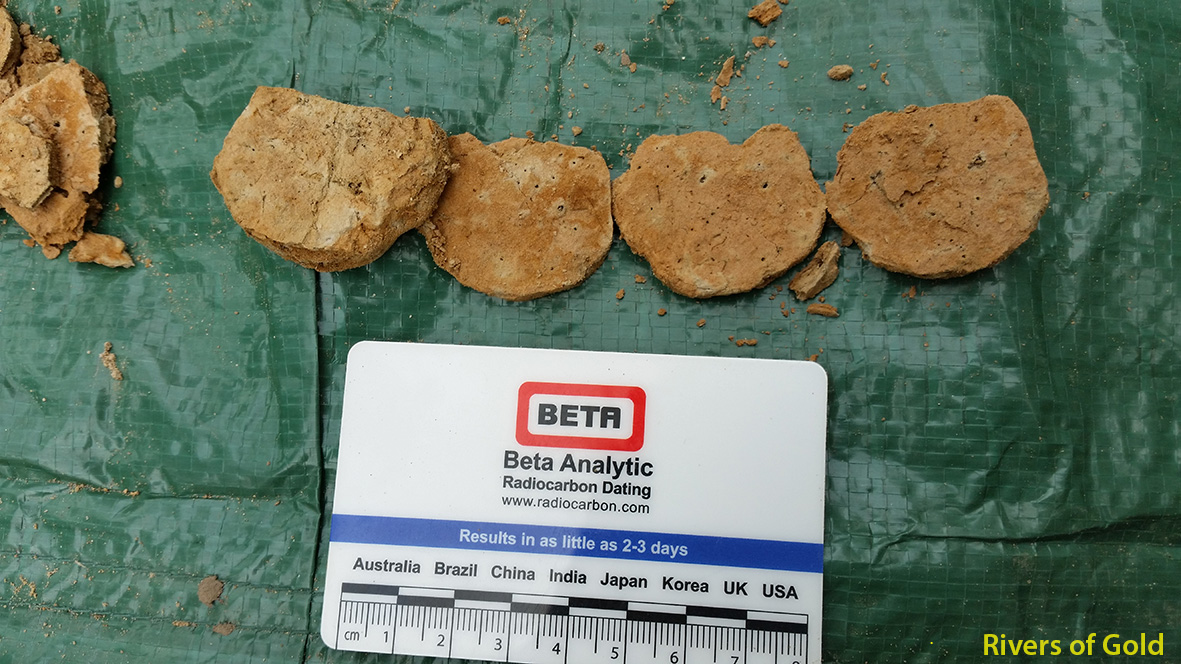 What was the environmental impact of gold mining on Victoria’s rivers?

To answer this question we are combining approaches from several disciplines.

Archaeology and history provide information about where the mining took place, when, and the kind of methods used.  Geomorphology helps to understand and interpret how the rivers would have coped with the all the extra soil.  Environmental chemistry provides insight into how much contamination is present and how the chemistry of soils on the floodplains have changed through time.

We are using historical maps, aerial photography, and LiDAR images to identify how the rivers have changed.  Soil samples are taken from floodplains and exposed river banks where tailings have been identified.  These are taken back to the lab to test for contamination and to examine the soil structure.

One of the first questions has been to identify which rivers and parts of rivers were affected by sludge.  This has required extensive archival research.  One of the most useful sources of information has been the many government reports following public enquiries.  There were major enquiries in 1858-1860, 1886, and 1914 and smaller local ones in other years.  In the twentieth century the Sludge Abatement Board also made regular reports.  All of these documents record interviews with local people and their complains about what was happening.  They also include descriptions of the rivers and the results of water sampling.

Based on this information we have mapped the extent of river pollution from mining in 1886.  At that time three quarters of Victoria’s major catchments were effected, reaching from the mountain rivers of East Gippsland all the way across to the Wimmera and stretching from Bass Straight to the Murray River.

read more about the historical evidence for river pollution 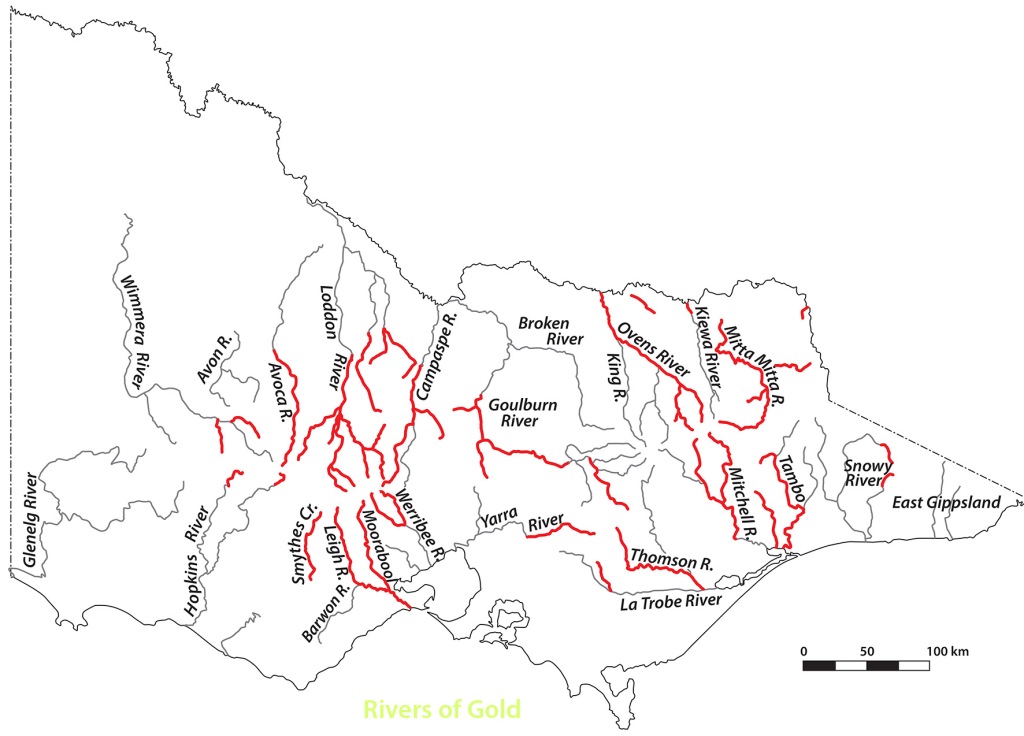 Victorian rivers affected by mining sludge in 1886, reconstructed from evidence in Sludge Board (1887).

Archival records can provide data about the quantity of tailings that went into the rivers from gold mining.  One of the best sources is the series of annual reports produced by the Mines Department between 1859-1891.  These include information on the type of mining methods used.  Oral testimony from other archival sources discusses how much sediment each type of mining produced.  We combined these sets of sources to calculate how much sediment was produced by each type of mining method.  We then extrapolated from this data to provide an estimate of sediment produced in the periods 1851-1859 and 1891-1900.  We estimate that at least 650 million cubic metres of mine tailings were produced between 1851-1900.  A further 174 million cubic metres of tailings was produced in later years by the dredging industry.

The Mines Department data is organised by Mining District.  We converted this into totals for each river catchment using spatial information from the VicMines database and the Australian Hydrological Geospatial Fabric.  The rivers with the most tailings were the Ovens, Goulburn, and Loddon and tributaries of the Barwon and Upper Murray.  All of the affected rivers received far more sediment from mining than from other sources, more than 600 times much for the Barwon.  Victorian rivers did not receive as much sediment as rivers in other parts of the world with mining, such as California or the UK, but the tailings affected a much larger total area in Victoria.

read more about the quantity of tailings in the rivers 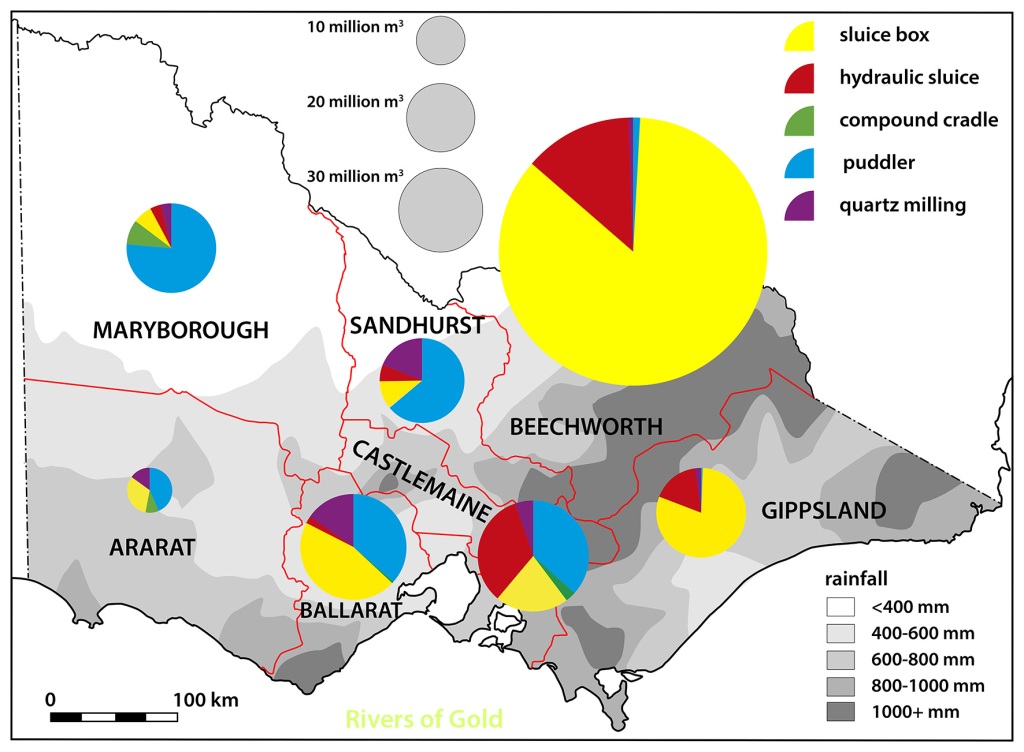 Production of alluvium by mining technique and Mining District.

Mercury was one of the major contaminants associated with gold.  Miners used mercury to concentrate the gold and separate it from the ore.  They tried to retain and re-use the mercury as much as possible but inevitably some was lost during processing.  This was particularly the case in the earlier phases of mining when treatment methods were less efficient.  Mercury is a known contaminant in many Victorian waterways and comes from a number of sources including industry and coal-fired power production.  Mercury is highly toxic and there is increasing awareness of it as an environmental problem.  Determining how much mercury might have been released in the past is an important step in managing it now.

The mining industry was the largest user of mercury in nineteenth-century Victoria.  Archival records from the Mines Department are able to provide some indication of just how much mercury was used.  The most complete set of records relevant to mercury are for the period 1868-1888.  During this time the Mines Department recorded the quantity of mercury used and lost per week in all the stamp batteries in use in Victorian mines.  Other types of mining also used mercury, and it was used both before 1868 and after 1888, but records of these other users and other periods are not available.  By multiplying the mean amount of mercury lost by the number of stamp batteries operating and the number of weeks in the year we have been able to calculate the total quantity of mercury released into the environment.  We estimate a conservative quantity of 121 tons of mercury were released over the twenty years for which we have data.

As mining waste entered many Victorian waterways it is important to know as much as possible about the health risks today.  The Environmental Protection Authority carries out periodic testing of Victorian waterways for mercury and other contaminants.  Their results should be used to guide the use and management of river systems. Victorian river catchments with volumes of historical mining sediment in millions of cubic metres, and Mining District volumes in red.